Home » Blog » Bible Stories on Gratitude That Will Change Your Heart

Bible Stories on Gratitude That Will Change Your Heart While we understand faith and service, we often fail to understand the importance of gratitude in our lives. Often, we call out for help when we are in crisis or need.  Yet, we forget to give thanks for the many blessings we have in our lives. The following article offers some wonderful bible stories on gratitude and how it can transform us in our lives.

The best Bible stories on gratitude must include the story of the ten lepers, Jesus and the sinful woman, and the story of Hannah and poor Job. Of course, we can never forget the story of brave Daniel in the den of lions and Jonah’s ordeal and redemption in the belly of the whale.

Praise lacks power without also giving thanks. Learning to adopt a mindset of gratitude may transform your life, just as it transformed the people in these Bible stories. If you seek inspiration for a more fulfilled spiritual life, here are some of the best Bible stories on gratitude to show you the way.

This wonderful story takes place in Luke’s Gospel when Jesus and his disciples were traveling toward Jerusalem. While Jesus is en route for the greater salvation of humanity, he comes across ten lepers. Who, keeping their distance, call out to Jesus to show them mercy.

What was important in their calling Jesus was that they not only called him by name but that they called Jesus ‘Master’. This showed that they knew and had some faith in the power of Jesus.

Jesus told the lepers to show themselves to the priests, and when they did, they found that they were miraculously healed. However, only one leper returned to Jesus and “threw himself at his feet,” in thanks. This leper was a foreigner called a Samaritan.

Jesus then asks why only one leper has returned and questions the whereabouts of the other nine lepers. He remarks that only the foreigner returned to give paradise to God. He then tells the Samaritan to “rise and go” and that “his faith has made him well.”

More on The Ten Lepers-Bible Stories on Gratitude

The importance of this story is that merely believing will not truly cure your spiritual soul. It is in the act of true faith and thankfulness to the Lord our God that truly heals our soul.

What is important is that Jesus tells the leper that it is through the leper’s own faith that has made him well. In a sense, the story reveals that the power to heal is through our own faith and thankfulness, regardless of who we are or where we come from.

The story also shows that often we call on God when we are in need.  Yet, we forget to give him praise when we are well and happy. To be true to our faith, we should give thanks and praise to the Lord when he has bestowed healing and happiness upon our lives and not only when we are in need. When Jesus went to dine at Simon the Pharisee’s abode, an unusual occurrence happened. A sinful woman from the village heard of Jesus’s visit and came to find him and awaited him with a jug of perfume.

When he arrived, she stood behind him weeping with love and gratitude and, in utter devotion, wet his feet with her tears and dried them with her own hair. She then anointed his feet with perfume.

When the Pharisee saw that Jesus allowed such a sinful woman to touch his body, he wondered how Jesus could indeed be a prophet. Jesus then told Simon a parable that explained why the woman’s act of devotion was not only accepted but treasured.

He then told Simon the story of two men who owed a moneylender 500 denarii and 50 denarii, respectively. Neither could pay the moneylender back, but the lender forgave the debts of both of the borrowers.

More on Jesus and the Sinful Woman-Bible Stories on Gratitude

Jesus also pointed out that Simon had not even anointed Jesus’s head with oil which was a common gesture of respect at the time; then, the woman had anointed Jesus’s feet with sweet perfume.

Jesus then explains to Simon that her great love has atoned for her many sins by her acts of devotion. He then explains that those who truly love the Lord have their many sins forgiven, but those “who have been forgiven little, love little. He then forgives the sinful woman of her sins.

His moving story teaches us that through devotion, gratitude, and service, we are indeed freed from our sins and not merely by virtue that we live a sin-free life. The story also reminds us that we are all part of God’s enormous love despite our pasts and failings.

This story tells of Elkanah and his two wives, Penninah and Hannah. God had blessed Penninah with children, but Hannah was barren, bringing her much heartache. Each year when they visited Shiloh to make sacrifices and worship, Pinnanah was cruel to Hannah and reminded her of her barren state.

One year, Hannah broke down and entered the temple alone to beseech God from her heart to grant her a child. In this fervent prayer, she offered her child up in service to God, should he give her her one wish.

Her silent prayer was so heartfelt that the priest thought she was drunk, which she explained was not true. When God granted her a son, she weaned the child and offered gratitude for God’s blessing, the same priest in service to God.

This story shows us that it is in truly opening our hearts to God that we shall be blessed. It is our sacrifice that we shall achieve our true happiness, which is union with God.

The story also shows that in order to be truly blessed, we must keep our promises and vows despite how hard they might be. The later verses tell of Hannah being blessed with several children after Samuel, her first son, and that she rejoiced. The story of Job is one of the most famous stories on gratitude contained in the Bible. The story tells of the prosperous and righteous Job, with enormous wealth and his many children. Job is God-fearing and mindful of his duty to God and lives in abundance and happiness with his large family.

One day Satan appears before God in heaven, and God tells of his devoted follower Job. Satan taunts God, saying that Job would curse God without his wealth and children.

God allows Satan to test Job, only making Satan promise not to harm Job himself.

Satan rains all disasters on Job, taking all his livestock and wealth. Satan even causes a hall to collapse on all his children, leaving him with no heirs.

However, even though every peril rained upon Job, he does not turn away from God or turn to sin. God restores his fortune double-fold despite his perils once Job surrenders his pride and offers his heart to the Lord.

Then Job says, “My ears had heard of you, but now my eyes have seen you.” This statement tells us that we draw closer to God through suffering, and through devotion and thankfulness, we shall prevail.

One of the favorite stories on gratitude for children must be the story of Daniel in the den of lions. Daniel was the favored administrator of King Darius, and he lived a righteous and God-fearing life.

Due to Daniels’s royal favor, others became jealous of him and coveted his position of well-earned power.

These men fooled King Darius into issuing an edict that prohibited anyone from giving praise to their God for thirty days in pain of death. In service to God above all else, Daniel continued to pray and gave thanks to God three times a day.

Daniels’s enemies caught Daniel praying, and he was sentenced to being thrown into a den of hungry lions. As the boulder closed on his escape, the enemies taunted him to ask God to rescue him from his predicament.

The next day, the King found Daniel untouched and alive. Daniel told the King that God had sent an angel who shut the mouths of the ferocious beasts. The King was filled with relief and happiness that his trusted advisor was safe.  He told all his people to fear and worship the God of Daniel.

This story shows us that being grateful and keeping faith in God, despite the perils, may bring us closer to God and his blessings and protection. 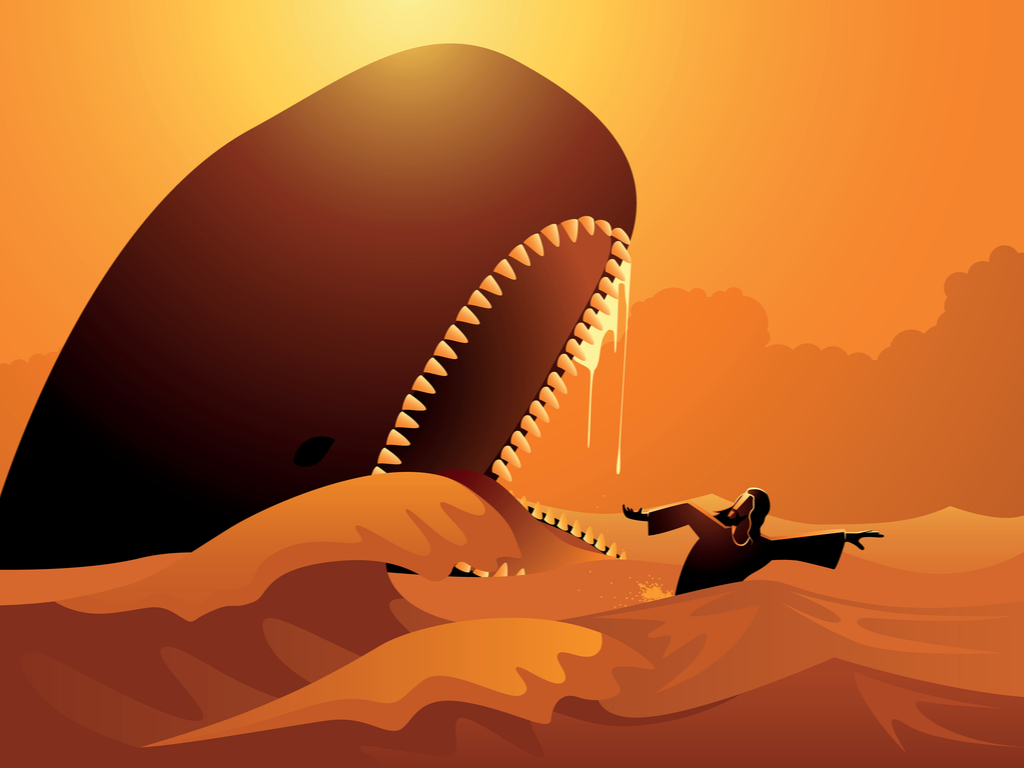 Another favorite bible story for children and adults alike is the story of Jonah and the whale. Jonah was sent to preach to the Nivenhites, who had displeased God.

However, Jonah was tempted to escape his responsibilities and climbed upon a boat to escape God’s will.

While out to sea, an unnatural storm arose, and the sailors drew lots and found Jonah the culprit, which he admitted.

The sailors did not want to throw Jonah overboard and even tried to row the boat ashore. However, the storm became worse, so they threw Jonah to the waves.

God sent a whale to swallow Jonah. He lived in the whale’s belly for three days and nights.  Finally , Jonah turned to God with thankfulness and praise and a promise to drive Him in gratitude and obedience.

God then made the whale spit Jonah out onto the beach and safety. This story shows that Jonah’s repentance and gratitude changed his heart toward God and brought him back into a spiritual state of grace.

In our busy and chaotic lives, we often fail to notice all the things we have that we should be grateful for.

Gratitude opens our hearts and reminds us that our lives are not solitary but part of a larger plan.  Truly, this is part of being spiritual souls and part of a greater love in an increasingly material world. Take time to give thanks for being alive and part of this amazing experience we call life.